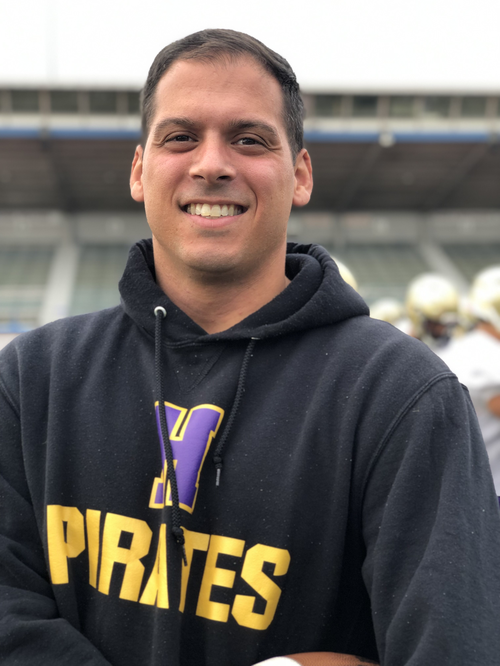 Anthony Berg is a coach for the "little guy." Growing up, Anthony loved the game of football because of his dad's love for the Washington Huskies. Berg grew up in Mukilteo and played quarterback at Kamiak High School. He went on to play for Saddleback Junior College before coming to the University of Washington as a "walk-on ." Though Berg made the team, he never expected to see the field on game day — but he still loved it. "It was an honor to wear the "purple and gold," Berg shared. His greatest contribution was working hard as the scout team quarterback, giving the Husky Defense a good look at what the opposition would be doing on Saturday and making the defense work hard to stop his squad. "I was below-average as an athlete and quarterback, never the main guy," said Berg. Because of that experience, Berg has a heart and appreciation for the kid who loves the game and wants to work hard and be part of the team. At UW, Berg met Highline High School Head Coach Deontae Cooper, a teammate with Berg then. "As a "walk-on," Coop was one of the first guys to really accept me," said Berg. When Berg was in the hospital, "Coop" was the guy that came to visit me; that is the type of leader and friend he is." Their friendship developed, and as their playing days ended, they soon talked about coaching together.

When Coach Cooper was invited to come to Burien and Highline High, he reached out to Berg about coaching together. They knew the area was talent-rich and had the potential to produce great teams, but the talent did not always come out. They knew this would be a project, a work in progress, but the opportunity to build rather than inherit a great program grabbed their hearts and minds.

For Berg, player development is the greatest joy in coaching, second only to winning. To this end, they chose to "go against the norm" of putting one of their best athletes as the quarterback. Instead, they decided to take a freshman with great potential — Ronan Rasmussen — and began to develop him. In his sophomore year, Rasmussen has rewarded Berg with huge strides forward, lifting weights during the off-season, gaining a much stronger understanding of the playbook, reading defenses, and improving his fundamentals. They knew that if they could create an environment of excellent player development, especially with a Quarterback, more and more talent would want to come to Highline. They've chosen a long-term approach with a solid plan to build a winning program from the bottom up.

Berg's desire is to bring out the best in the kids, whatever their talent level is. "We coach every kid hard, even to the end of the bench," said Berg. Through this rigorous training, the Pirates have developed unified respect and comradeship for one another as they dig deep and rise to the challenge to become a team worthy of winning a State Championship; this culture of shared effort and excellence is vital to Berg.

"The pieces are there to make a deep run. We have explosive speed and physicality," said Berg. The Pirates will run a spread offense to maximize their talent in both the pass and run game. "This should be a very fun year;  we have a great team, great coaching staff, and the conviction we can win," reflected Berg.

When not helping kids grow as men and football players, Berg is a Sales Director for Icertis, a CLM company based out of Bellevue. "I wanted to be in technology and sales, in some capacity. I enjoy my work and feel grateful for my current opportunity. I'm at a great company," said Berg.
Posted in Local Sports