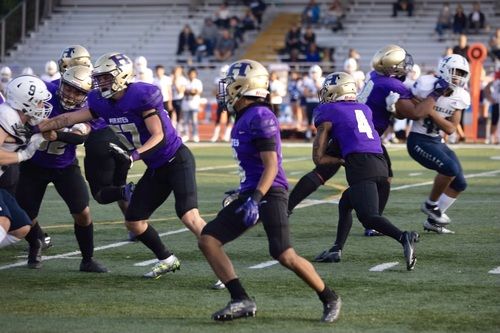 Highline vs. Interlake Sept 15, 2022
One minute and 25 seconds into the game, Running Back Jamaine Matthews scored a touchdown in a 16-yard run. It was Matthews's first of 3 touchdowns and a total of 4 Pirate touchdowns in the first quarter. With a 27-0 lead over the visiting Interlake Saints at the end of the first 12 minutes, it was clear that Coach Deontae Cooper had his team back in stride after the disappointment of the last week's loss against the Kennedy Catholic Lancers match-up in the Battle for Burien.

All told, 7 Pirates scored in the night, including a safety early in the second quarter by nose-tackle Gabriel Tautua. Matthews, Rico Soza, Nat Clay, Charles Brown, and Marquawn McCraney each found the end zone.

The Pirates also introduced a new weapon — Field Goal Kicker — Josiah Maginniss, who made 7 out of 8 attempts for the Point After Touchdown. Madinniss also sent the ball deep on Highline kickoffs, allowing the Pirate defense more space to operate. 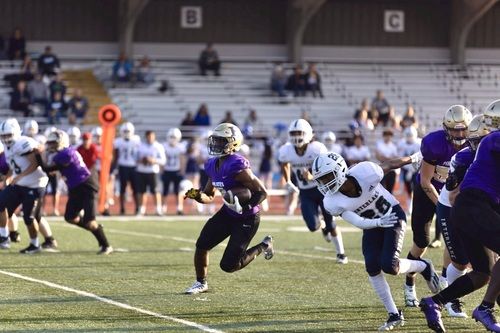 The Pirates established the line of scrimmage as their own from the very beginning. On defense, nose guard Gabriel Tautua made runs up the middle, which proved unfruitful for the Saints. The Pirates served up a constant flow of blitz' which disrupted Saint Quarterback Shelton Henton. Henton could not find his rhythm and the Interlake offense was always off balance, not getting a gain of more than 15 until the second half.

On offense, the Pirates established the run game in the first series, with the offensive line opening contestant holes with great blocking from the line, led by Center Jordan Heng and Senior Guard Jacob Brown. Highline's speedsters could get into the defensive backfield, where their slashing style was extremely effective.

The first half ended with the score at 57-0 — fully restoring their confidence and belief in one another. 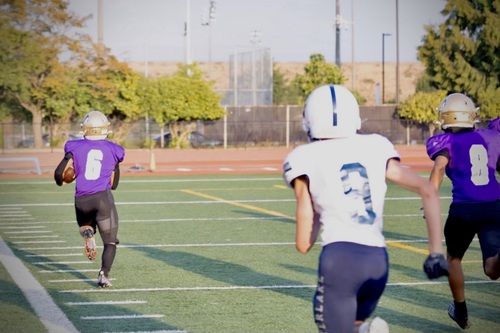 Neither team scored in the second half, allowing Coach Cooper to put most of the team on the field. With the starters cheering on, the young players got their opportunity to play.

Back-up Quarterback Junior Houth led the team in the fourth quarter to the red zone, but time ran out. The Pirates showcased a new talent in the backfield — running back Velazquez Morales. He executed the quick, jitterbug style Coach Cooper is training the running backs on. Morales is small but shows a sturdy and dogged determination. "It was good to see him out there. He works really hard in practice," said Coach Cooper.

"We had a bad taste in our mouth from last week. We let the game get away from us. We were in the red zone 5 times and only converted once. That was a point of emphasis for us this week. We needed to execute and be more efficient in the red zone. We protected the ball this week and did not allow turnovers. We were much more polished," added Cooper.

The Highline Pirates achieved their goal of returning strong, fully redeeming their presence as a fierce team to contend with this season. Their next game is at Highline Stadium vs. Evergreen High School on Thursday, September 22nd, at 6 PM.

At the time of publishing, the game statistics were not available. 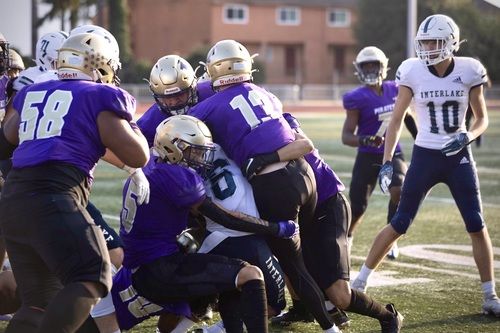