Recap of Battle For Burien 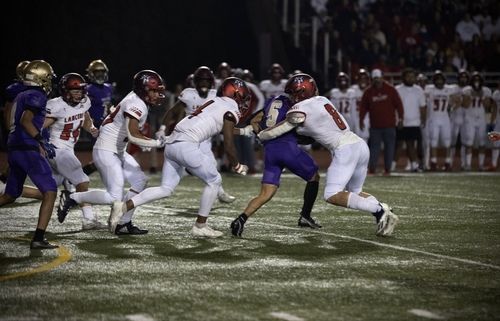 The Kennedy Catholic Lancer football team put a pretty good whipping on the Highline Pirates last Friday night, with the final score of 41-6. The Battle for Burien was highly anticipated by both teams. Highline, the team with the most to prove, allowed the game to slip away and get out of hand. Kennedy Catholic, the much more seasoned and experienced team, forced multiple turnovers and three downs in the first half alone. Monday morning quarterback thought the pirates should have taken the conservative route on some 4th downplays and punted or kicked a field goal. With the pressure getting to them, the Highline game plan appeared to be an all-or-nothing attempt for a win with no thought of keeping it close and hanging in there for a feel-good matchup of 2A Highline versus 4A Kennedy Catholic.

Highline had its share of causing the Lancers some grief. With an intercepted pass, a recovered failed Kennedy Catholic onside kick, and a recovered Kennedy Catholic muffed punt snap. At the 11:08 mark in the second quarter, Highline trailed by only 8-6. Any long Lancer-engineered drives so far were limited. Most yards gained came from the field position gained on failed 4th downplays or other Pirate fumbles. However, Kennedy Catholic put together two scoring drives to end the second quarter, showing their superior size and polished play. They took a 21-6 lead into halftime.

The third quarter opened with Kennedy Catholic kicking off a lazy squib kick, and Highline started a drive on their 45-yard line. Highline shows their potential with a combination of runs and passes, but Kennedy Catholic returns a fumble on the Lancer 26-yard line for a 74-yard touchdown. With a 2-point conversion, it is now 29-6. Highline is teetering and takes the ensuing kickoff for three plays, one of which is a sack and fumble, and now the Lancers are on the 15-yard line where they score four plays later. The Pirates are now down 35-6; a chance for a comeback is not likely with 5 minutes remaining in the third quarter.

In the first two games, the Lancers found some key go-to players who are consistently performing. Senior quarterback #15 Payton Faker has been steady in completing 50 percent of his 70 passes, and the 16.1 yards per completion has helped to stretch the field. Junior running back #23 Zach Schell has been a workhorse grinding out 186 yards on 33 of the 46 team rushing attempts. Schell also has the longest run in each game, with a 25-yarder against Eastside Catholic and a 30-yarder against Highline. Senior #8 Mason Hayes is perhaps the most versatile player. It is fun to watch him in all sorts of positions. He kicks off, catches passes, carries on two-point conversions, and roams the defensive backfield with authority. Also, keep your eyes on the two Pac-12 recruits (ASU) #24 Xe'Ree Alexander (LB/TB) and (USC) #59 Micah Banuelos (OL/DL) as they do their thing. Their dominating size, speed, and skills demonstrate why they're playing at the next level.

Kennedy Catholic has struggled a bit with turnovers. They had 4 Interceptions, a fumble against Eastside Catholic, an interception, and a couple of special team blunders against Highline. The Lancers survived the turnovers against Highline, but they may have cost them the game against Eastside Catholic. After the two 2022 opening games, the Lancers are starting to make their presence known. Between balanced passes, run on offense, and attack mode on defense, plus skilled players deep on the roster, Kennedy Catholic should have an edge in every game the rest of this year.

Up next, Kennedy Catholic plays Kentwood at French Field in Kent at 6 PM on Thursday, September 15th. Kentwood had a quick dip into the state playoffs last year but is a bit slow out of the gate in 2022. So far this year, both games are against 3A teams that also had short playoff runs and are always solid squads. The opener versus Lakes ended in a 50-23 loss, and game two against Peninsula was another lopsided loss at 31-7.
Posted in Local Sports