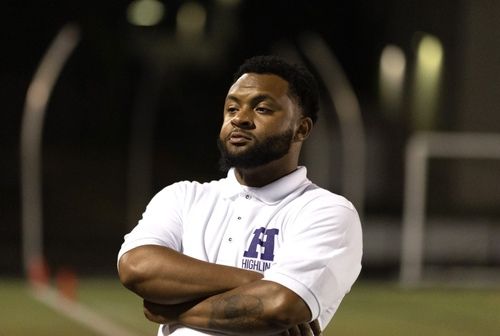 What is it like to lose the state championship game? JT Jackson knows that feeling. As a senior at O'Dea, he helped the team make it to the year's final contest, only to lose to Bellevue High School. "It is heartbreaking," said Coach Jackson. And yet, for Jackson, the opportunity to play for a storied program changed his life. "I experienced a quality of coaching from men who became mentors and life friends.", said Jackson.

Coach Jackson was drawn to coaching because of his love for the game. Basketball was his first sport, and he reconnected with Head Coach Deontae Cooper at a Highline High School basketball game. Cooper immediately saw his heart and talent and invited him onto the staff. Jackson said he had to give up basketball because "I was too aggressive for the game." Football did not have that problem.

Jackson loves to teach!  "Football is a microcosm of life, teaching kids how to deal with and get back up from adversity,'' said Jackson. "I enjoy the competitive nature of the game. I enjoy the learning I receive from teaching. I enjoy seeing kids grow and develop. Every kid needs to be coached differently. Once you understand what the player needs, then build the friendship. They need to know when they’ve failed and when they’ve succeeded;  that needs to be communicated differently to  individual kids.", according to Jackson.

For Jackson, he needed to wait until he had the time to coach. Starting his own moving business gave him the flexibility to schedule around the team. Continual giving and coaching is something he plans to keep building throughout his life.

Coming to a program in the beginning stages of “building excellence” was attractive to Jackson. "I could have gone to an established winner like O'Dea, but I wanted to be part of establishing a new place of excellence,'' said Jackson. For Jackson, success this season looks like “leaving it all on the field”, playing in December, and seeing the kids moving on to great things.

"This is going to be a fun year. We are going to surprise some people. We will spread the ball around to various players and run 4 set receivers. With talent and speed from Marquawn, Brown, Williams, Moss, Estrada — we will be a handful for the defenses we face,"Jackson revealed.

Coach Jackson truly loves these kids. His attention to knowing them for who they are will be life-changing for some of them. Not only is he passing on the mentoring and life friendship he was given as a player and building a new program of excellence, but perhaps he will help those kids get what he really wanted: a State Championship. "That would be my great joy,'' said Jackson.
Posted in Local Sports