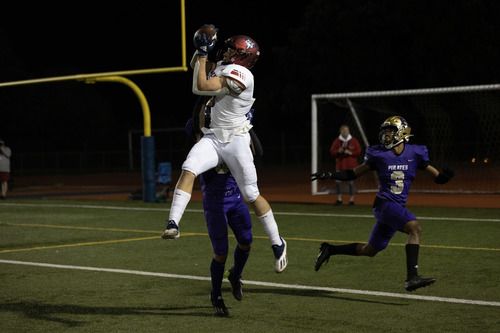 By Martin Barrett.
The Lancer line dominated the first Battle for Burien game. On both sides, they owned the blocks. They opened holes for the run game on offense and gave their QB Payton Faker time to find receivers downfield. On defense, the Lancers forced three turnovers on downs in the first half alone, shutting down the Pirate run game and keeping the fleet Pirate receivers off balance.

The Pirates began the game's first series on defense; with a sacking and swarming defensive tackles, it looked like they would be in the Lancer backfield all night. The Lancers lost 20 yards on the initial four plays. The Pirates took the punt and returned the ball 30 yards to the Lancer 40. Lining up on their first offensive series Ronan Rasmussen threw a 20-yard pass to Charles Brown, followed by Rico Jerez-Sosa with a 12-yard scamper, putting the ball inside the Kennedy 20, and it appeared the Pirate offense was going to use its speed to move the ball. But the Lancer line stiffened and forced a four and out on the Pirates. That was the most momentum Highline could muster on offense for the rest of the game. 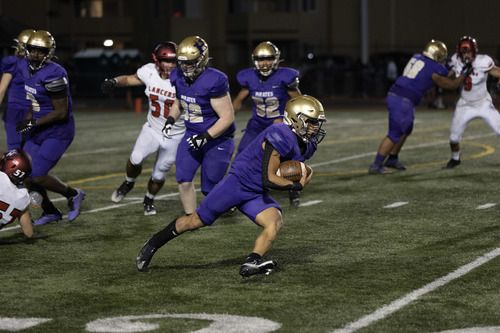 Kennedy immediately began moving the ball in offense and, in two plays, including a 40-yard pass reception by Mason Moriarty, took the ball to the Pirate 18. However, Cornerback Nat Clay of the Pirates intercepted Faker's pass to wide receiver Maclane Watkins. Once again, Highline gained momentum, but Kennedy intercepted the ball on the Pirate 45. After several penalties that slowed the Lancers, the offense began to move, and XeRee Alexander punched the ball in the end zone, and Kennedy was on the board. A two-point conversion by Moriarty and the Lancers had an 8-0 lead with 3:51 seconds left in the 1st quarter.

The Lancers followed the touchdown with a failed onside kick that gave the ball to the Pirates on the 45-yard line. But Kennedy forced another Pirate turnover on downs. 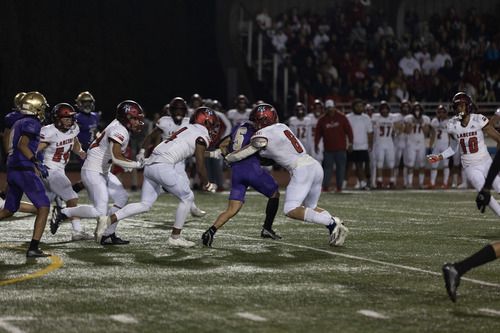 Kenndy capitalized on their lead with Faker connecting with Mason Hayes for a 25-yard touchdown reception at 5:56 in Q2, and the score was now Kennedy 14, Pirates 6. Kennedy then held the Pirates on downs in the next series, following it with another touchdown pass from Faker, this time to Moriarty. Moriarty then kicked a successful point after touchdown, and the score was 21-6 at the half.

Highline had a few things to build coming out of halftime. They had shown that their speed was explosive and could reel off large chunks of yardage. The Pirates began with a drive capped by a 25-yard reception by Jamiane Matthews to the 10-yard line. However, after a Pirate penalty, the Lancer's Shane McConville scooped up a Highline fumble and ran the field for a touchdown. A successful 2-point conversion run place by Hayes put the score 29-6, Lancers at 8:20 in the 3rd quarter. 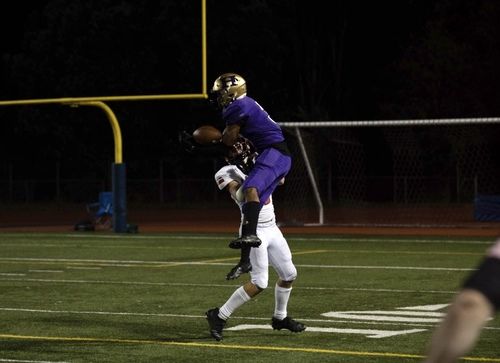 Jojo Paaga of Kennedy scooped up another Pirate fumble at 7:12 in the third, and two minutes later, Nate Barnes took a Faker touchdown pass from the 12. Another successful PAT, and the the score was 35-6 Lancers.

Kennedy finished their offensive show with a 13-yard touchdown run by Hayes at the 9:15 mark of the 4th quarter. The Lancer's dominance of the box was widespread among several players. As expected, Micah Banuelos stopped everything that came to his side, demonstrating an excellent capacity to get off blocks and make the tackle. Ish Taliauli was also immovable, and together Banuelos and Taliauli kept the center of the box a difficult place for the Pirates to make holes in.

Alexander and Myles Jackson tied up the run game in the corners and kept the pressure on Rasmussen. Rasmussen found himself under pressure throughout the game. Harried passes and throws on the run hampered accuracy. Few passes hit their targets. 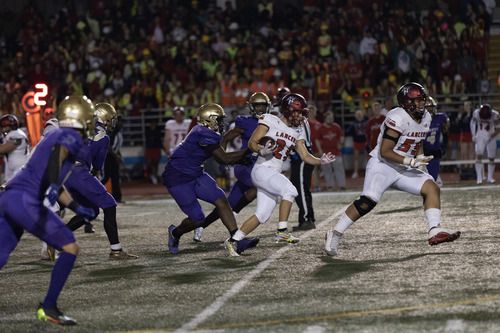 The first Battle for Burien (in many years) did not fully show the excellent advancement the Highline Pirates have made under Head Coach Deontae Cooper.

Kennedy gained the momentum in their second offensive series, and they never relinquished it. Kennedy played a more physical and dominating game. The speed of Highline never achieved sync. While showing some glimmers in the 1st half, all hope of some quick strike scoring was dashed by the two Q3 fumbles.

Though they've risen from the ashes, the Pirates are still a very young team compared to the Lancers. With continued seasoning, and while maintaining their consistent efforts under coach Deontae Cooper's training, they will definitely give the Lancer's a Battle for Burien next year.
Posted in Local Sports
Tagged with battle for burien, Kennedy Lancers, highline pirates, Burien news