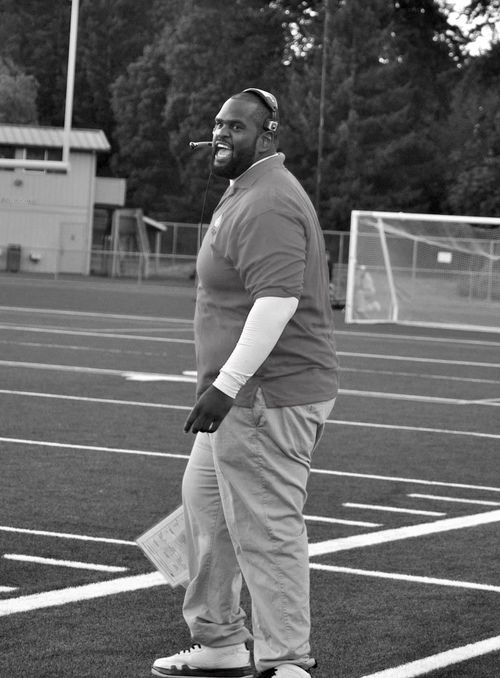 When I first came on the field to begin interviewing the coaches, I asked one of them, “What is House’s real name?” I received a puzzled look. Then the response, “House.”

Weighing in at 370 pounds during his playing days as an offensive tackle at University Washington (2005 to 2009), “huge” describes more than his size. House shares the same quality found in every one of the staff head coach Deontae Cooper has brought to the team — a huge (house-sized) heart for the kids he coaches.

House came from Jordan High School in Southern California, where as a senior, he was named to an all-league, all-CIF, Best in the West, and all-state team. He was also named on the Long Beach Press-Telegram “Dream Team” and made both the Principal’s Honor Roll and President’s Honor Roll.

House has been coaching for nine years. He met Coach Cooper at UW and is currently an Account Manager at PitchBook Data.

House likes the structure of practices at Highline. “They are detailed and organized. Having the horn blow to signal times and changes allows me to focus on teaching the kids,” said House. “Coaches and kids are hungry; they want to learn, grow, and win. For many, this is the way to go to college and become a better person.” This last point is something that all the coaches at Highline repeat almost like a mantra; they are committed to helping kids become better people. Being on the football team IS the classroom, and excellence in everything is the toolkit.

“When we started the program, getting kids to class and bad grades were the issues. Kids skipped and did not do their work. Coaches spent their time chasing down kids and getting them into class. Those days are behind us; kids are in class. It would be a shame for a kid to get an offer only to be disqualified for bad grades. To this end, practice begins with a study table for an hour, and all players must check in with me to qualify to go out on the field. We are coaches on and off the field.” House emphasized.

“Highline will be running a very aggressive defense this year. There will be tons of blitzes. I want at least one touchdown per game out of the defense. Last year we did that in 7 or 10 games,” House said with a bounce and intensity. Speed is clearly an asset House believes will serve them well, and he intends to maximize the advantage.

On offense, House shared that the most challenging element of teaching his offensive linemen is how to identify defenses and what “reads” you get from them that are credible. It takes time and experience.

“This is going to be a fun year,” House enthused. “Our objective is to practice over the Thanksgiving Weekend and to be ready to play in December.”